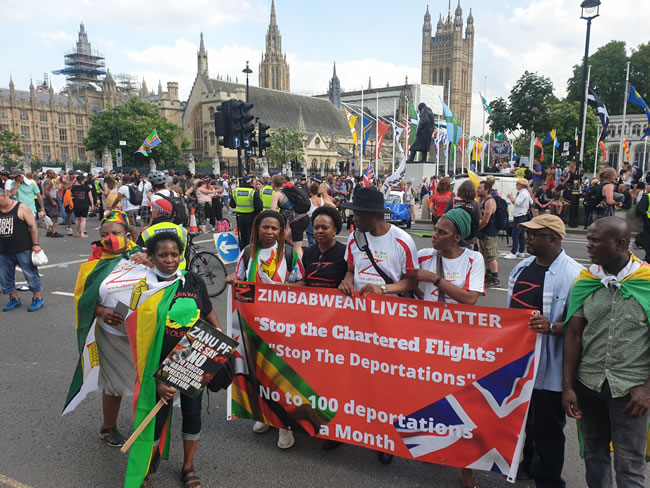 "Fight the Flight" Demonstration started at the Zimbabwe Embassy.

Members of the two main political parties in Zimbabwe, namely MDCA [Movement for Democratic Change Alliance], ZAPU [Zimbabwe African People's Union], plus the Human Rights groups ROHR [Restoration Of Human Rights - Zimbabwe] and ZHRO [Zimbabwe Human Rights Organisation], plus several Church Groups were encouraged to attend this and other demonstrations in the future to Fight the Mass Forced Removals of Zimbabwenas in the Diaspora. Due to the extended lockdown, such demonstrations have not been conducted for over 12 months - so there was a little "interia" - all the same some 31-35 people attended during this "first-day-back! This also included members of Movement for Justice and Global Afrikan Congress who activiely joined in the protest.

We started to congregate outside the Zimbabwe Embassy from around noon on Monday the 19th July 2021. The first time since last year, and the first quasi-Vigil since 11th March 2020 [due to the draconian Lock-down obligations]. We were demonstrating that the Home Office has radically changed their policy - and has [since the 5th July 2021 detained approximately 150 Zimbabweans. Claiming that most are "hardened criminals" - which is disengenuous to say the least - as we know most [detainees] are victims of the complex, convoluted and expensive British asylum procedures.

ZHRO and Zimbabwe Community Appeal Flickr Photos outside the Embassy 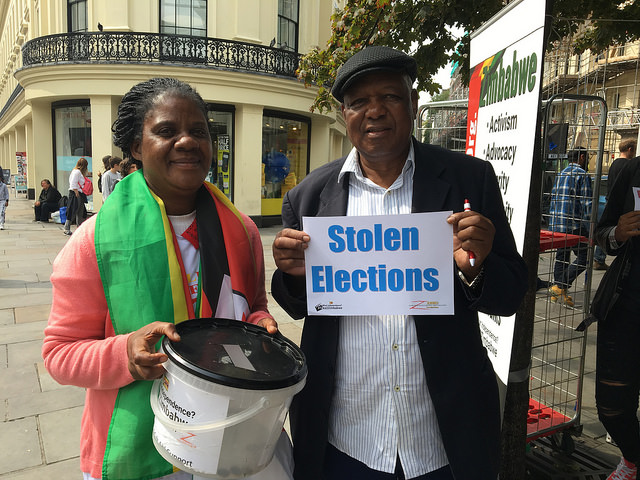 Wednesday at the Vigil was a little subdued, as the vast majority of the Diaspora and Zimbabweans at home digest the injustice of the fake Inauguration, the Fake Con-Court Judgment and the Fake Election numbers that saw the winners denied DEMOCRACY - YET AGAIN.

No one is accepting ED as a President - no matter how much propaganda spews from Zanu PF and their sycophants in the UK chaired by the odious Nick Mangwana of Zanu PF UK.

Talk was of a Government in Exile being supported by the diaspora - who were denied their Constitutionally given right by the toadies that populate the Junta. The diaspora represent 40% of the population - at least 3 million people who have fled Zimbabwe after 38 years of Zanu PF tyranny, violence, intimidation, corruption and utter mis-management that sees a once successful Nation reduced to abject poverty. 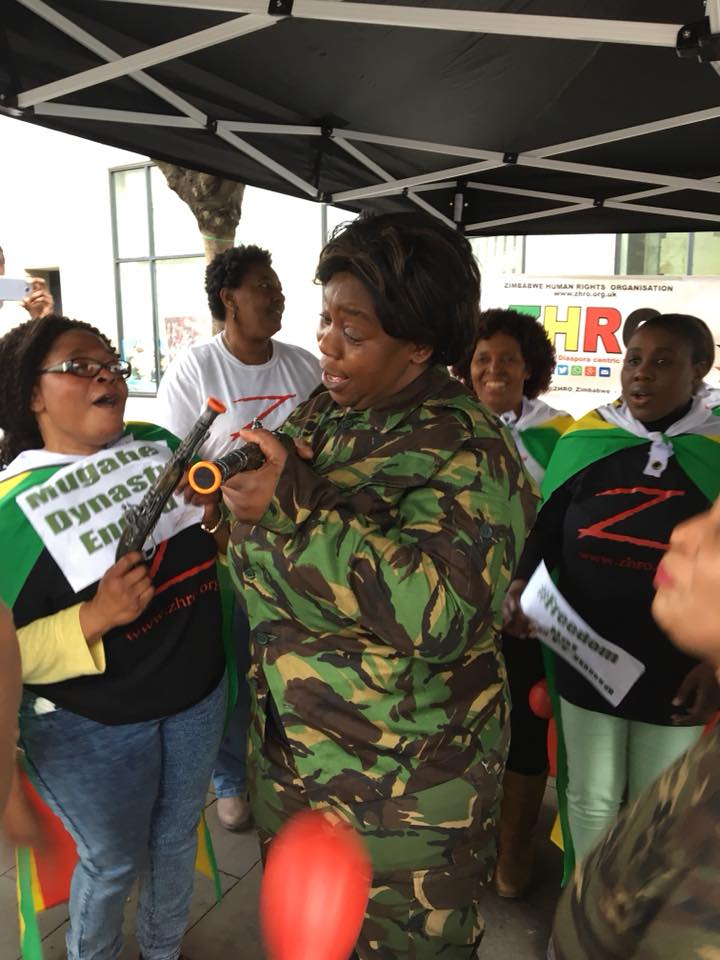 The military intervention in Zimbabwe is a result of power struggle within Zanu-Pf. It indicates the end of the Mugabe era who has dominated Zimbabwe’s political stage for nearly 4 decades.

The hope for a democratisation process may be giving Zimbabweans some cause for optimism, but transformative authority is yet to be seen.

The military ignited a flurry of activity on social media after it seized control of the Zimbabwe Broadcasting Corporation (ZBC). It left Zimbabweans across the world speculating as to what was actually taking place. However it is now clear that we are witnessing a special form of Zanu-Pf internal politics that require guns to aid persuasion.

The Zimbabwe Human Rights Organisation (ZHRO) Wednesday vigil called for the overthrow of a dictatorship to be followed by a democratisation process.

On Wednesday afternoon ZHRO members gathered at the Zimbabwe embassy in London to celebrate the 1st anniversary of the organisation.

The major highlight was the defacing of Mugabe’s portrait, tearing it and burning much to the titillation of people passing by.

It was torn apart The pieces were scattered, spat on, trampled, and then burned 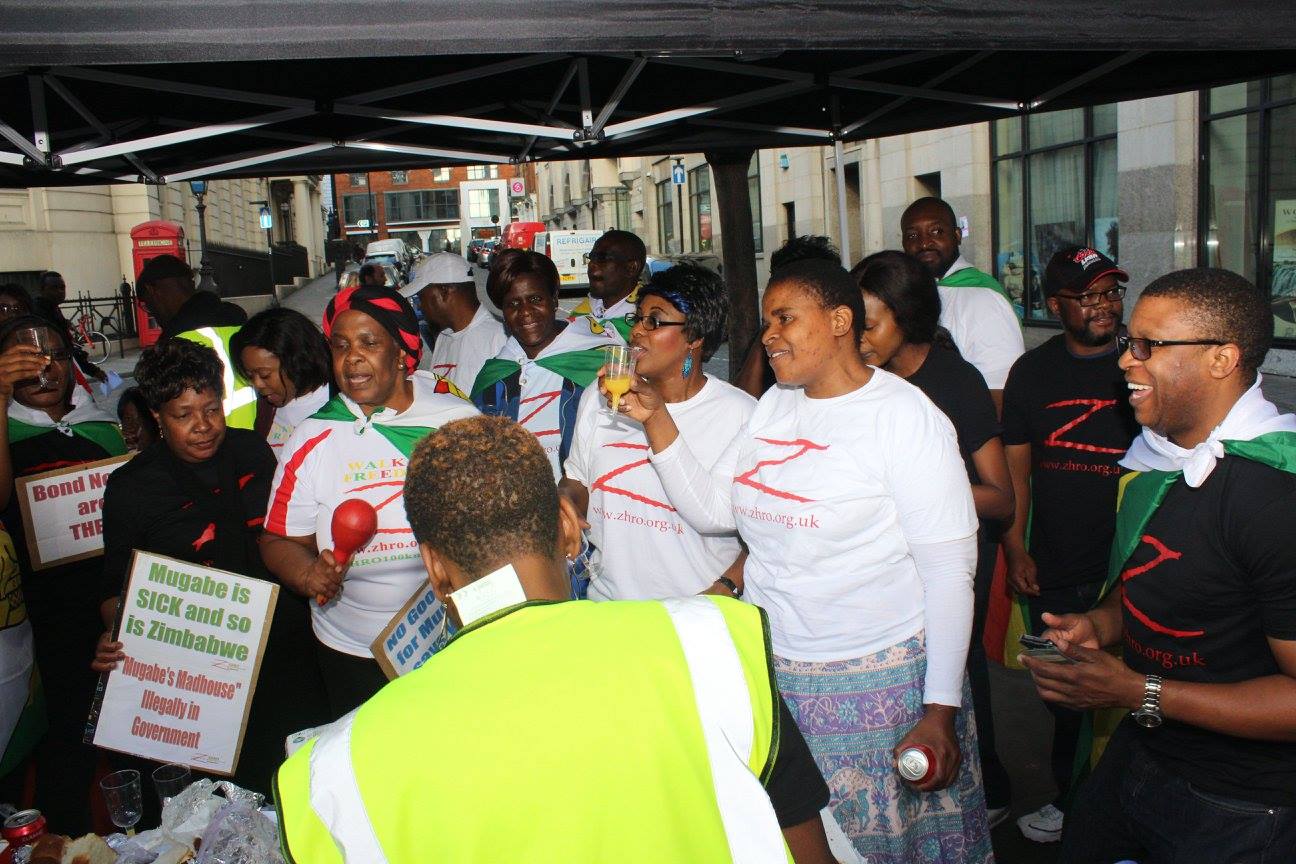